Welcome to my blog! If this is the first time, you are here then I request you to kindly read my Introduction post because I have certain things to say and they are all there:)

Also, if somewhere while going through any of the posts, you feel that something is wrong, plz feel free to comment then and there. I love to get corrected and so, plz do not think a bit before commenting on anything you think I have mentioned is wrong. The only request is plz maintain your dignity and mine as well in the words you use! Kindly do not let your words be a slur on others:) I would be grateful.

Also, I assure you that before writing anything here I will get the same checked with some experienced people, I will do a research again and then only, I will post the same on my blog so you can trust me.

Disclaimer: All the posts on this blog are based on my personal learning, opinion and views. It has no connection, no connotation with the organization I am or I was working for or with any person associated with me.

Difference between FDMA, CDMA and TDMA

I will try to put it in a very simple wayJ

Frequency division multiple access (FDMA):
It is a technology by which the total bandwidth available to the system is divided into frequencies. This division is done between non overlapping frequencies that are then assigned to each communicating pair (2 phones)
FDMA is used mainly for analog transmission. Its not that this technology is not capable of carrying digital information, but just that it is not considered to be an efficient method for digital transmission. Because just imagine if the frequencies to handle the customers gets over? What if more capacity is required? The only option would be to drill down the existing frequencies to a much narrower amount which will not be very competent. In FDMA all users share the satellite simultaneously but each user transmits at single frequency.
To understand this technology better, just imagine how FM radio works. All the radios have their own frequency bands and they send their signals at the carefully allocated unique frequencies within the available bands.

Code division multiple access (CDMA):
Unlike FDMA, CDMA separates calls by code. Every bit of a conversation is been tagged with a specific and unique code. The system gets a call, it allocates a unique code to that particular conversation, now the data is split into small parts and is tagged with the unique code given to the conversation of which they are part of. Now, this data in small pieces is sent over a number of the discrete frequencies available for use at any time in the specified range. The system then at the end reassembles the conversation from the coded bits and deliver itJ Does it make sense?
Just think about how you recollect your luggage at the end of the flight journey. When you check in, a tag with a code is given to you which is also given to your luggageJ And at the destination, you collects your luggage on the basis of thatJ I know you will say that you recognize your bag, but then I have a habit of always matching the codes of my bag and the one on the tag given to me and that is how I become sure of not picking up the wrong luggageJ

Time division multiple access (TDMA):
Unlike FDMA and CDMA, In TDMA the division of calls happens on time basis.  The system first digitizes the calls, and then combines those conversations into a unified digital stream on a single radio channel. Now it divides each cellular channel into three time slots that means three calls get put on a single frequency and then, a time slot is assigned to each call during the conversation, a regular space in a digital stream. The users transmit in rapid succession, one after the other, each using its own time slot. This allows multiple stations to share the same transmission medium (e.g. radio frequency channel) while using only a part of its channel capacity.
This technology enables three different users to use one frequency at the same time.
Here there is no need for three separate frequencies like in FDMA. As in FDMA, instead of monopolizing a single radio channel for a single call, TDMA efficiently carries three calls at the same timeJ
BTW, this technology is the one used in our GSM system

Have tried to explain the above technologies via a diagram which is below: 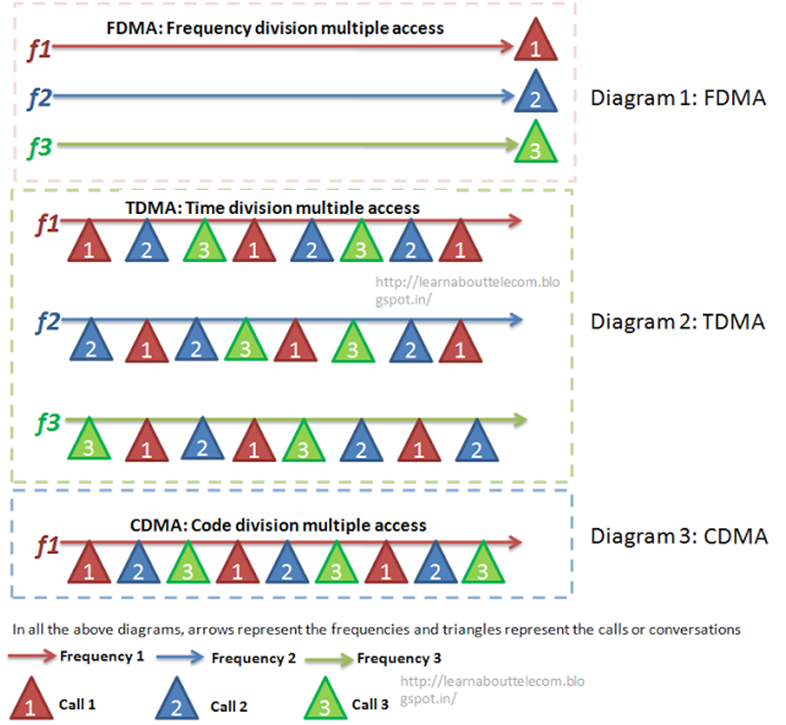 In the above diagram, you will observe:

I hope the difference is clear now:)
Penned down by shivani singh at 5:18 PM