Welcome to my blog! If this is the first time, you are here then I request you to kindly read my Introduction post because I have certain things to say and they are all there:)

Also, if somewhere while going through any of the posts, you feel that something is wrong, plz feel free to comment then and there. I love to get corrected and so, plz do not think a bit before commenting on anything you think I have mentioned is wrong. The only request is plz maintain your dignity and mine as well in the words you use! Kindly do not let your words be a slur on others:) I would be grateful.

Also, I assure you that before writing anything here I will get the same checked with some experienced people, I will do a research again and then only, I will post the same on my blog so you can trust me.

Disclaimer: All the posts on this blog are based on my personal learning, opinion and views. It has no connection, no connotation with the organization I am or I was working for or with any person associated with me.

Ok, so now when we are done with the entities of a Base Station Subsystem and are on verge of getting into details of Network Switching Subsystem, I thought why not to finish a very important part of the network here itself and thats of frequencies which are assigned to each of the cells. I have to be really very careful here because it’s a technical topic and I need to explain the same in simple and kind of non technical wayJ I will try.
Definition (we all have read it in physics):

How the frequencies work in cell sites: 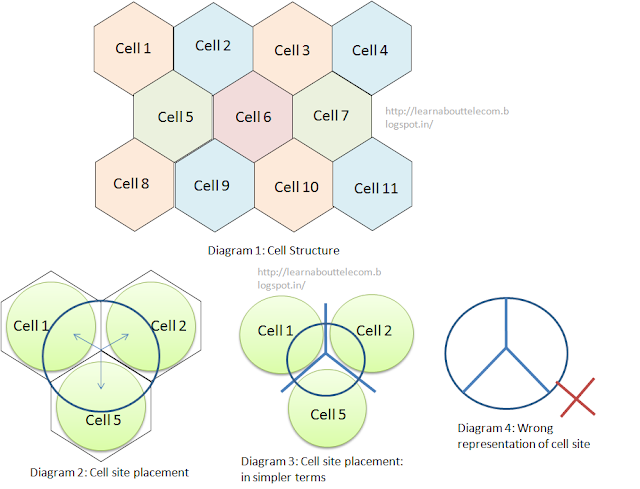 Multi band and Multi mode phones:
Before, mobiles could not tune themselves automatically to the frequencies they find, they needed the right hardware, not just software, to use different frequencies.
But today, most telephones support multiple bands as used in different countries to facilitate roaming. These are typically referred to as multi-band phones. Do not get confused with multi-modes phones as they are the ones which can operate on GSM as well as on other mobile phone systems using other technical standards or proprietary technologies for eg a phone that can support CDMA as well as GSM technology.
Multi band phones are the phones that can tune themselves to different frequencies. They can Dual-band phones , tri-band phones and quad-band phones
-       Dual band: that covers GSM networks in pairs such as 900 and 1800 MHz frequencies or 850 and 1900
-       Tri-band phones: that covers the 900, 1800 and 1900 or 850, 1800 and 1900
-       Quad-band phones:  that supports all four major GSM bands, allowing for global use.

Handoff or Handover:As the phone user moves from one cell area to another cell during a call is in progress (imagine if the
user is travelling in a car), the mobile station will search for a new channel to attach to in order not to drop the call. Once a new channel is found, the network will command the mobile unit to switch to the new channel and at the same time switch the call onto the new channel. There is NO indication to the user exactly which frequency you are using. The cell sites use sophisticated switching equipment to transfer your phone call from one cell site to the next. This is called a handoff . As you get too far from one cell site and the call quality becomes unacceptable, the cellular system looks for the next cell site and frequency to hand your call off to. All of this happens in split seconds and is not obvious to the user. So, next time your call drops while on phone on move, understand that the handover between the sites is not effective in that area.

Transmit and receive frequency are often called paired frequencies. That seems logical enough since it takes two frequencies to pass information. Unfortunately, the forward and reverse channels refer to just a single frequency, making a channel definition little confusingL
Transmit or Reverse frequency is the one which is used by the mobile to interact with the BSC and Receive or forward frequency is the one used by base station to interact with the mobile. They're what make talking at the same time possible.