As discussed in one of the last posts, the GSM network can be broadly divided into 3 parts:

As mentioned in last post, Base Station Subsystem takes care of all the radio related functions between a mobile and the network. It consists of Base transceiver stations (basically the tower, BTS) and a base station controller (a BSC)

Today we would be covering Base transceiver stations only. Would not be able to pen down all the entities of this subsystem in one post and so will explain them one by one:)

So, lets go ahead with BTS:)
All mobiles use a network of well structured and well engineered network of base stations and antennas to cover a large area. In simple terms, a base station is that part of the network which is accountable for handling traffic and managing the signals between a mobile phone and other components in the network switching subsystem.
A Base station contains the equipment for transmitting and receiving radio signals i.e. transceivers, antennas, and the equipments for encrypting and decrypting communications with the BSC (will explain in next chapter).
The area which a base station covers is called a cell and the place where the base station and antennas are located is called a cell site.
A cell is an area which is covered by each base station. This area is divided into regular shaped cells, which can be hexagonal, square, circular or some other regular shapes. Though the most commonly used are the hexagonal cells. It looks like a cell in a honeycomb as shown in the diagram below. Cell sizes can range from 1Km to 50 km in radius. Though, the cells built in GSM structure are much smaller, they generally do not go beyond 10km. 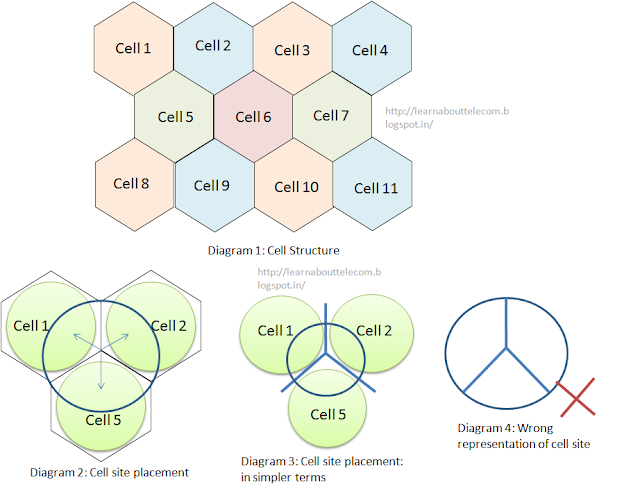 Each cell site's base station uses a computerized 800 or 1900 megahertz transceiver with an antenna to provide coverage. Each of the cells is assigned with multiple frequencies which are carefully chosen to reduce interference with neighboring cells. The group of frequencies can be reused in other cells, provided that the same frequencies are not reused in adjacent neighboring cells as that would cause co-channel interference. As I said above, would be explaining frequencies in different chapter so this is all about the same in this one.
Coming back, the area served by a cell site completely depends on geography, population, and the traffic in that particular area. In some GSM systems, a base station hierarchy exists, with pico cells covering the building interiors, microcells covering the selected outdoor areas, and macrocells providing more extensive coverage to wider areas. Narrowly directed sites cover tunnels, subways and specific roadways.
In short, the macro cell controls all the cells overlaid beneath it. A macro cell is often built to provide coverage and smaller cells are built to provide capacity. Hope this all makes senseJ
Been a lot of gyaan for todayJ Hope I was clear. Plz let me know your feedback...
Penned down by shivani singh at 9:12 PM