A brief on Postpaid and its billing

And so, I am back with a new chapter of my life and for this blog too. It is regarding that part of telecom that I never thought I would get a chance to learn or to work on.
Anyways, I joined one of the leading operators in India last year and my profile included handling the postpaid business which was very exciting and it was something very new and I am somebody who is always excited to learn new things in life. And moreover that would have been a challengeJ

Anyways, so there I got a very good opportunity to learn about the complete Postpaid business, the technical and even the non technical facet of it.

I would really love to pen down all that here on my blog because that’s something I just loved working on.


Today, in this post I will just give a brief on postpaid business. I am sure you all would be aware of what postpaid is…
In layman’s term, Postpaid is basically that kind of mobile connection that gives you the facility of using the services and paying for them later. Needless to say that this is completely contrary to prepaid system which can only be used in parallel to your balance. In postpaid connection, the customers are usually charged at the month end. For the whole month whenever the customer uses his phone, CDRs (Call detail records) are being generated or captured at the data collector at the network switch end. Below are few of the aspects covered in CDRs:
After the CDRs are generated, the role of Telecommunications mediation comes into picture. It is nothing but a process that converts call data to pre-defined layout that can be imported and recognized by the billing system. The Mediation System applies various rules on CDRs to process them, for example mediation system marks the international calls based on the dialed number (B-Number), same way mediation system marks the on-net calls based on A-Number and B-Number.


The data in CDRs is in binary form. The billing mediation platform typically reads this data and converts into common normalized format. Billing Systems and all other downstream systems, in turn, converts this data to component an understandable format.
The mediation system collects, collates and prepares data for consumption by the billing system, which often accept data only in a limited set of formats.


Typically a mediation platform is used for the following tasks:


The mediated CDRs are then, forwarded to a rating engine, which calculates the charge associated with the CDRs
Not all of the data transferred via billing mediation platforms is actually used for billing purposes. For instance, there may be a requirement to filter out all the calls which are having call duration less than 5 seconds, the best place to filter out such type of calls will be at Mediation System level. Same way if some extra information is required in the CDRs which is critical to billing then Mediation System will help in providing such information based on some other attributes available with-in the CDRs.


Once the collected CDRs are processed, Mediation System pushes all the CDRs to the Billing System using FTP because usually Mediation and Billing systems run on different machines
Apart from CDRs collection, mediation do a lot of other stuff some of which is mentioned below: 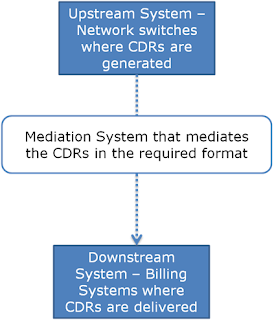 Hope all the above made sense…
Will take up how this billing happens in the next chapter and then will move on further to the marketing aspect of Postpaid as in how to do an analysis on the postpaid base, on churn, on other aspects.

Penned down by shivani singh at 4:10 PM